Chief Quipuha, also known as Chief Kepuha, was an interesting leader in his own right. As the Chief of Hagatna in the 1600s, he was the village chief who received Pale San Vitores and his entourage as they made there way into Guam as part of their missionary efforts spreading the Catholic faith.

So much controversy surrounds the demeanor of Chief Quipuha among the natives at the time. It turned out that he was very cordial to the missionaries and made an effort to accomodate their stay in the island. Some say that Chief Quipuha may have wanted to elevate his village’s prominence with their presence. While others speculate various motives. 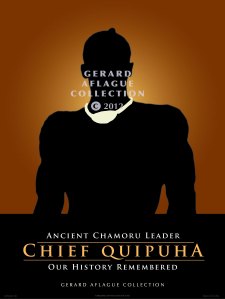 As I did not know, Chief Quipuha had a son who was aptly named Chief Quipuha II. He was more of a rebel than his father. As the story goes, he was less than pleased with all the plans that the missionaries put into action as part of their efforts to turn natives into bible believing and God fearing villagers.

Chief Quipuha is embodied in statue in the village of Hagatna in Guam. Interestingly enough, while the statue itself was funded with federal monies as a result of the rebuilding of the island after its destruction from Typhoon Pamela in 1976, it was more than just an icon for tourists and villagers alike to appreciate. The character of Chief Quipuha is such that many Chamorros espouse the leadership of this great ancient Chamorro. In 2008, in honor of his qualities, they decorated this statue with a moon shaped bone pendant necklace.

So much can be said of this great leader in the writings of the Spaniards. For more details of the illustration of Chief Quipuha, click here.